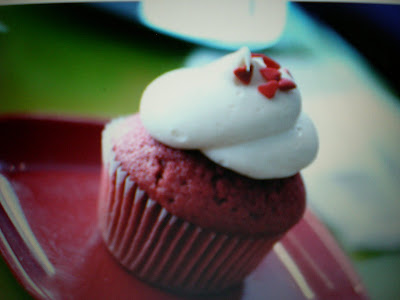 1. Preheat the oven to 170c - gas 3
2. Put the butter and the sugar in a freestanding electric mixer with a paddle attachment (or use a handheld electric whisk) and beat on a medium speed until light and fluffy and well mised. Turn the mixer up to high speed, slowly add the egg and beat untlil everything incorporated.
3. I a separated bowl, mix together the cocoa powder, red food colouring and vanilla exract to make a very thick, dark paste.Add to the butter mixture and mix throughly until everything combined and coloured. Turn the mixture down to slow speed and slowly pour half the buttermilk. Beat well , then add half the flour and beat until everyting is well incorproted. Repeat this process until all the buttermilk and flour have been added.
4. Turn the mixer up to high speed and beat until you have smooth, even mixture. Turn the mixture down to low speed and add bicarbonate soda nad vinegar. Beat until well mixed, than turn up the speed again and beat for a couple more minutes.
5. Spoon the mixture ito the paper case until 2/3 full and bake in the preheated oven for 20-25 minutes.
6. When the cupcakes are cold, spoon the cream cheese frosting on top.

1. Beat icing sugar and butter together on medium-slow speed until the mixture come together and is well mixed. Add the cream cheese in one go and beat it until it completely incorporated. Turn the mixer up to meduim speed. Continue beating until the frosting is light and fluffy, at least 5 minutes. Do not overbeat, as it can quickly become runny. 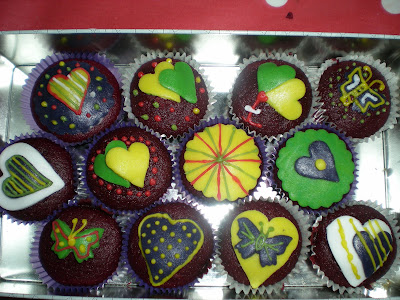 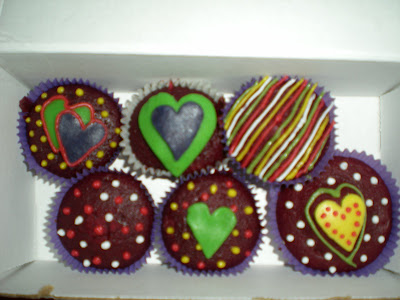